Last night I was introduced to the world of painting. I have had many friends go to places like ‘Bottles and Brushes’ and ‘For the Love of Art’, but I had never had that experience myself until last night. To be honest I was excited to try something new, but was nervous that my type A personality would not just allow me the freedom to paint. I was also skeptical that the picture that was shown to us would somehow make it’s way onto my canvas. 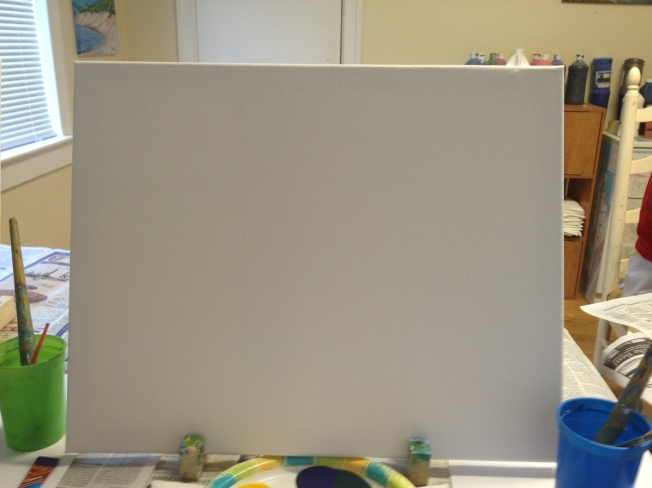 I sent this picture to Chris and declared that my end result would probably not look nearly as good as it did right at this moment. As the instructor walked everyone through the first lines to draw, made suggestions on how to mix colors, and helped guide which end to start on – it was interesting to me how others responded. There were some who wanted to make theirs a night scene, others who wanted to replicate the original and a few who went in a completely different direction altogether. 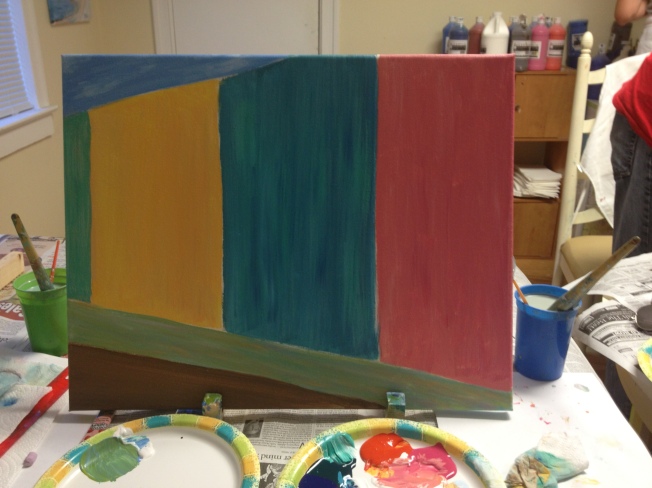 I wanted to replicate the original (as best as I could) and by this point was feeling pretty good – how hard are straight lines really? It was just after this point that the small details of the picture had to be put into place, and that is where I began to slow down. I counted at least three different times that she was ready to show a new technique and she had to look at me say ‘It’s okay, I’ll come back to you’ because I was that many steps back. Window panes, borders, cobblestones were finally figured out and put into place and all that was left were flower boxes and flowers. I sat and stared at the painting – she came back to me and I admitted that I was stuck – the flowers freaked me out. How the blazes do you make flowers? She simply said with mild disgust in her voice ‘Flowers are the easiest part’ and kind of walked away. So I held my breath, closed my eyes (not literally) and hoped for the best. 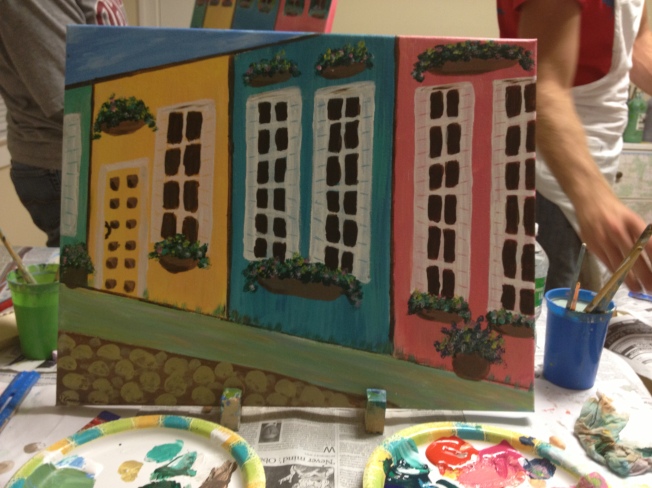 So this was the end result, not a masterpiece by any stretch, but not as horrific as I envisioned it going either. After staring at this canvas for over three hours straight, I finally looked up to see what others had done. There were several that looked similar and there were some that were much different. The most unique of those was the XXX Adult store at night with a chalk outline of a body out on the sidewalk (and I was stressing over flower boxes). Why walk you through my evening of painting…besides the obviously riveting details of it all…ha! 😉 Over the years, God has been very creative in the ways that he teaches me and gets my attention. My tag line for this blog is ‘life is an illustration’ primarily because those small seemingly unimportant moments of life, God uses to talk to me and teach me. Yes, I’m wired weird and I’m okay with that. 😉 Last night was one of those moments. Much like the people in that room, I was reminded that we all attack life and the things that come at us very differently. What is easy for some, is stressful for others. The decisions we make can lead to good things or could land us in some pretty dark and scary places. We can strive to be like Christ (the original) or we can choose to go at it on our own. Over these past weeks of walking this road to what will eventually be a miscarriage many have wondered where strength has come from, have commented that they don’t know how they would walk that road, or have expressed confusion for me. I thought about that a lot last night. God hands each of us a blank canvas, he instructs us on techniques like pray without ceasing and leaning on him in times of trial, he gives guidance on where to start and how to maneuver through – but ultimately it’s up to us. He instructs to trust, but I can choose to fret. He promises that he will never leave me, but I can choose to think he’s a liar. He continually tells me that he loves me, but I can turn my head in hate. The picture that would ultimately create would be a pretty dark one. I’m not strong. I don’t have this figured out. I don’t know what the end result will be. I am weak. I am tired. So when he says trust that looks so much better than fretting. When he makes promises – I want to hold to that because he has shown himself faithful too many other times. When he tells me he loves me…through his word, through you…my heart simply chooses to believe. It’s just too genuine and real to be anything but truth. The peace I found in this simple moment last night was that when I looked at that blank canvas, I genuinely did not think anything good would result – I had never done this before, how would it be possible? I’m in the same place regarding this miscarriage, I’m sure you’re in a similar place regarding a decision, a health issue, a crisis, or an opportunity that is in front of you. I don’t know the end result, I’ve never walked this road before so my mind wants to think this is an impossible journey…but his word tells me differently. The canvas in front of you may be pretty blank, but he can walk you through to what will ultimately be a masterpiece in him, at least that is what I am holding to. Praying for you. 😉