So trials are inevitable; they come as an attempt to strengthen our faith and bring us to a place of completion; we should consider that pure joy. One would think that, having barely touched the surface of the subject; James would really continue diving down deep into that subject. But that doesn’t exactly seem to be the case…check it out…”If any of you lacks wisdom, you should ask God, who gives generously to all without finding fault, and it will be given to you. But when you ask, you must believe and not doubt, because the one who doubts is like a wave of the sea, blown and tossed by the wind. That person should not expect to receive anything from the Lord. Such a person is double-minded and unstable in all they do.” James 1:5-8 So it seems we are taking a bit of a detour…or are we? At what point in our lives do we need wisdom more than in times of trial? When we are in a season of testing, is that not the time we most need counsel? In the face of these storms…when clearly scripture tells us to consider these times with a spirit of joy…there has to come the question, how? Wouldn’t you agree? So to whom are we asking that question?

As a society, I have to say, we have come up with some pretty creative ways to seek wisdom and counsel, affirmation and answers. Social media. This has become a great outlet to express what’s on our mind, to complain about our day, to ask for recommendations from everything from what to have for dinner to a good family doctor. We read of problems that others have expressed and even find ourselves scrolling through the responses that have come from people we don’t even know – just to see what others might have said. We are always looking for wisdom, for answers, for understanding. But James is ‘politely’ pointing out here that we are looking in the wrong place and with the wrong heart.

As I have pointed out before, Chris and I met when were quite young – just teenagers. Needless to say, the quick way in which we became so serious about each other did not exactly thrill Chris’ mom and therefore I was not a particular ‘fan favorite’ for quite some time (or at least that was my 17 year old perception). But in fairness, there were several things going against me. Chris was her firstborn. I lived eleven hours away. He was at a place where he needed to be making decisions on college, not a spouse…to name but a few. Now having a good relationship with his mom was very important to me, and I began to process ways that I could get into her good graces. This was never something that I prayed about. At no time did I ever get on my knees and ask the Lord for wisdom in how to find favor with Denise or how to build a real relationship with her. At the time, it seemed a silly prayer. If I was going to be in Chris’ life, by default I was going to be in hers so why pray for what was going to happen (Did I mention I was very young and clearly stupid at the time?). I wrestled with how to become close with Denise for a long time, and finally I came up with a brilliant, beyond brilliant plan. I was going to become an elementary school teacher. Denise was an elementary school teacher…how perfect would that be? We would have common ground, similar interests. I would be able to go to her for advice and talk through experiences with her and we would become close. I sought no other opinion, but merely stepped out and applied to college, making all the right preparations and choosing all the right classes that would set me up for a teaching degree. I even got a job at an elementary school as an instructional assistant. Perfection! Well, perfection…on paper…reality was something much more different. I struggled horribly with classes. I faced such internal struggles – ones that I could never quite put my finger on. By this point, Chris and I were married and were both working full-time jobs while going to school full-time – not exactly stress free years. I soon grew to a point where I began to hate my classes. I lacked motivation, I just didn’t want to be there – and so I didn’t go. The problem was I never told Chris that I wasn’t going, never dropped the classes and tried to hide the semesters that I had flunked out of every class. It was in those moments, that I began to pray…prayers of fear – what if I’m found out, what will Chris say, how can I get out of this? I never acknowledged that maybe I was trying to force something that wasn’t intended for me. I never laid it all down before the Lord or sought His direction and I certainly never asked for His plan or wisdom in what to do. And yet I continuously asked myself the question of why was I in this mess?

The day finally came where Chris found out the truth of how I had been handling my college career. It was a painful time in our relationship and yet a groundbreaking one for reasons I’ll save for another day. But together we decided that I should stop trying to pursue a degree. Fast forward, about a year. I was working for a Christian bookstore as their gift buyer and assistant manager. One afternoon I had the pleasure of meeting a woman who was a part of a national women’s conference. She was in town because they were holding their conference at a local church and she was in doing some promotion. Somehow she and I struck up a conversation and she quickly asked me if I would take my lunch break with her. For the life of me I would not be able to tell you the details of that conversation; I could not even tell you her name but it was the most life changing conversation I’ve ever encountered. As I sat listening to her talk of doing ministry and being on mission for God, affecting the lives of women and reaching the lost for His glory…the Lord gently and firmly interrupted the conversation. I sat listening to her rather intently, when I was overwhelmed by Him saying…’you know… this is what I have for you’. Now granted His voice was not audible…she had no clue He had interrupted her and I certainly played it off, but it was very much like He had slipped into the booth beside me, nudged me and began to talk. He continued, ‘do you hear what she is saying…that is what I want for you…for your life, your walk, your career.’ I cannot tell you how excited and bubbly I became in that moment. I wanted to shout out ‘OKAY!’ but before I could He completed His thought…’but there’s something you need to do for me first. You need to go back to school.’ Now I’ve got to tell you – the woman who was talking to me probably thought I had completely lost my mind because I went from completely excited and bubbly to completely nauseous – turning all different shades of green all the while not telling her of the conversation God and I were currently having. I can ONLY imagine what expressions kept randomly running across my face. From inside my head I screamed at God – ‘WHY?!?!’ to which He directly replied ‘so that I might have that victory in your life.’ I inwardly confessed that I couldn’t do it – I would fail – that I would start and (to quote James) merely end up blown and tossed by the wind. And do you know what His response was? ‘You’re exactly right…you will.’ I suddenly realized in that moment that this was a trial, a test that I had failed – miserably. Everything in me knew that I would, without question, fail at it again if not for one thing. I needed to seek help from Him. I clearly lacked the wisdom on how to succeed in this – I needed Him. I had tried semester after semester telling myself ‘you can do this’; knowing that I wouldn’t be able to. I had tried to go down a career path that the Lord had not prepared for me. And I had tried to manipulate a relationship with my mother-in-law that the Lord had designed to be beautiful in His time. I had asked with doubt plaguing my heart and mind and the result had been nearly drowning from being tossed about in the waves so much. I realized that this would hang over me forever, not just as an area where I had failed, but where I hadn’t allowed the Lord to win. I could not do it without Him. Exactly a year from that lunch I walked across the stage of the coliseum, dawning a cap and gown, accepting my diploma and praising my God – who, because I had asked Him (over and over and over that year) for wisdom, had given it to me generously without finding fault. 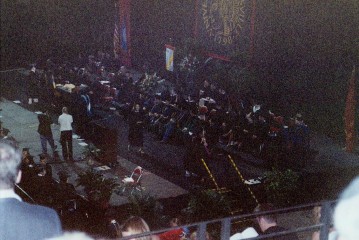 Hebrews 11:1 – Now faith is being sure of what we hope for and certain of what we do not see.

Hebrews 11:6 – And without faith it is impossible to please God, because anyone who comes to him must believe that he exists and that he rewards those who earnestly seek him.

Are you seeking Him? Do you believe He will give you the wisdom you seek? Is your faith in Him, man or yourself? He stands ready to give…generously…won’t you allow Him to?

My prayer for Today…

Precious Lord, I realize quickly as I think through foolish decisions I’ve made in my lifetime – I come to one resounding understanding – you are a massively patient God. I also see that I am far more stubborn and thick headed than I realized. There are times where I have encountered situations and sought wisdom and opinions from everyone I could think of, but you. There have been times where I’ve just rested in the knowledge of what I felt and wanted to do. In my ignorance, in my stupidity…I fail often to seek that wisdom from you. But, as you promised, you have never forsaken, never failed, never left me – no matter how many times I have forsaken you, failed you, and walked away from you. I need your help Lord to remember to lean on you and look to you during the hardest of trials, but Lord may I not forget to look to you for the day-to-day. If you are the one who has laid this path I’m on before me – why on earth would I look to others for direction. May I hold to you and look to you – always. I pray for my friend who has been gracious to read my ramblings today – I pray that when they have questions, concerns, need wisdom, or question the trials that surround them currently – that it is You that they look to and lean on. Precious Lord – thank you for loving us so desperately, intently, and completely. I love you. In Jesus name…Amen!